We, Ukrainian women veterans, volunteers, active female service members, form a cohesive part of socially active citizens who are ready to take responsibility for themselves and their country. That is why we established the public organization ‘Women’s Veteran Movement’.

We encourage female veterans, active military personnel and volunteers to participate in the Women’s Veteran Movement. We focus on spreading democratic values in society and want to do everything to ensure that the next generation grows and develops in a peaceful and successful Ukraine. 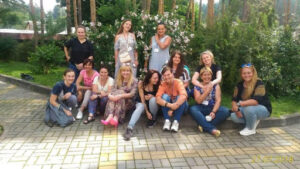