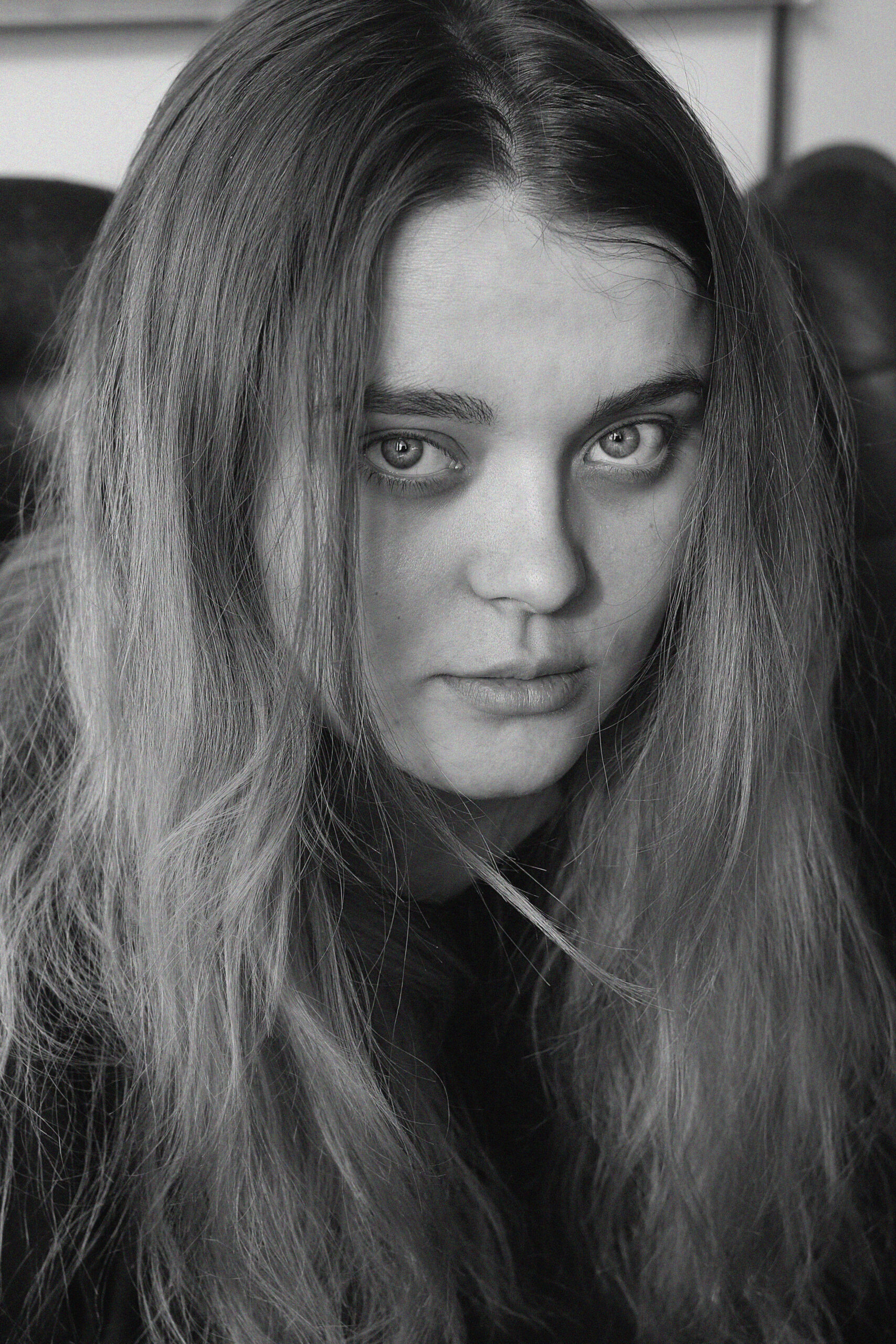 She is always calm, even-tempered, and friendly. Also, she can speak openly and without loud words, it seems, about everything she has in mind. So the story of 24-year-old Veronica, a volunteer of the Ukrainian Women Veteran Movement, is presented in the first person.

I had a normal life. I worked in a restaurant. Six months ago I left Mariupol and returned to Kyiv and began to establish my life here. Everything went as usual, but there was anxiety in the air. I tried to get used to the thought of a full-scale Russian invasion of Ukraine. Burning documents at the Embassy was a key moment that gave me a signal. My parents argued with me a lot, they were nervous and said that I was overthinking.

On the morning of February 24, I woke up because of the whole house shaking. I wrote to my mother, and she called me and shouted into the phone: “What are you coming up with again?” I advised her to watch the news… I was scared. But most of all I was afraid that I would not find what to do. I really didn’t want to sit at home. In two days I joined the Ukrainian Women Veteran Movement with the help of acquaintances. On the first day of the war, I came to see my best friend. His mother has been volunteering since 2014, and she also comes from Mariupol. She could not sit still, she came here the first day, and the next day she offered me to join her. I stayed here.

When my mother watched the news at night, she was shocked. My parents stayed at home – on the outskirts of Mariupol. My aunt and uncle lived on the next street. On the fourth day, my parents moved in with relatives. There were many of them. Then everyone started leaving for the city center, where we also have an apartment. An hour and a half later, they decided to go to friends’ place who are in another part of the center. They accepted them. They did not know that they would come to them and how it would actually happen. Many thanks to the people who sheltered my family.

There is no heating or electricity in the whole of Mariupol. There is connection only in some places. On the first day, when there was normal service and provision, I forced my parents to charge all the devices they have. They did a very clever thing: they turned off all the phones. They called me once every three days or sent me text messages. They had food supplies and ate with the people they were with. But I know a moment when my father had to loot for dog food. This is unusual for my family because my father is a doctor, a very intelligent person. This is shocking in its own way. And I understand that they are other people now.

At some point, there was no connection. For 5-7 days I did not hear them and did not understand what was happening to them. Through various groups on social networks and television news, I tried to understand what happened to that house where they lived. They were near the Drama Theater. During the search, I saw a photo where the building next door had a hole through it – there was no middle of the house. It was all happening around them. Being in Kyiv, which also suffers attacks, but less, I can’t even imagine how you can experience those sounds… I won’t know how they stayed in their clear minds if I can say something like this about my own parents.

As it turned out, later the apartment building where they were located was hit as well. Then the parents decided to go away. There was no opportunity to take them outside of the city. Volunteers, who take a lot of people out of the city, could not get there. I tried for a long time to find a person ready for such a mission, but I couldn’t.

And one day, after a 5-day break, my mother called me in tears. I didn’t understand anything. She was shouting that they were alive and left the city on foot. The father walked a 10-year-old brother out. Mom carried a backpack in front, a bag of dog food in the back while leading the dog. A young, still a little stupid, but large labrador retriever. I think he started listening to people and getting closer to them. But frankly, I have no idea how an animal could be led through half the city. My mother simply refused to leave without him.

My parents are safe now. As of March 21, only the windows in my house were destroyed. And the apartment building is located across the street from the maternity hospital, which also was hit. As of March 6, it was not damaged. No one knows what the state of it now is. Now my parents and I are talking about the fact that they need to leave the shore. There are many issues that need to be addressed. I didn’t hold back: “Mom, you didn’t listen to me, and that’s what it led to …” And she replied: “Yes, I already told everyone that I took your words not seriously. I’m sorry I didn’t listen to you. ” This situation made her understand that I was no longer a child.

During all the days of waiting and uncertainty people around helped me stay strong. This support is what helped me stay sane. The fact that we with the Ukrainian Women Veteran Movement help others really helped me. This thought was reassuring me: if I help even strangers here, then someone will help my people. And so it happened.

At the volunteer headquarters, I am responsible for the functioning of the food. There is a warehouse with products, there is a kitchen, there are various restaurants and bakeries that also help us. I am the liaison between all this – I compare the needs with what we have. There are a number of restaurants that supply us with ready meals. We transported ready-made food to Zhulyany, to the military checkpoints, we provide food for a combat unit of the Armed Forces of Ukraine when they get in touch with us, and a bomb shelter nearby. We regularly help the Organization of Ukrainian Nationalists and the Solomyanskiy District Territorial Defense, there are hundreds of people there.

I have control over what we give to civilians and the military, prioritization, and stock control. There are no food problems in Kyiv yet. Although once it was difficult to find a vegetable set for borscht and cereals. Problems sometimes happen because prices have risen. Stocks also sometimes run out of those who help for free. But we are informed when they get restocked. There are also people on the Left Bank of Kyiv who have a kitchen and feed hospitals and the Territorial Defense Forces. We also help them with food, and they sometimes feed those we ask for.

What does Mariupol mean to me? When I look at the photos from there, I recognize every place. I remember everything: both small and significant moments for me. I had graduation at the affected Drama Theater. My brother was born in the hospital that was bombed. And the house on the outskirts of the city, where my whole family lived, was built by my great-grandfather. Official news says that 80-90% of the city is destroyed. In my message on Instagram, I wrote that at the same time 80-90% of my heart was destroyed. Of course, I understand that everything will be fine… But my city will remain a hero for me because wonderful people have always lived there. Despite the fact that they are abrupt, with “Donbas pride”, but the people are kind and all treated their city with love. Mariupol residents have very different views. But in recent years, they have eased their relationship with each other and started communicating normally.

I am about ¼ russian. In the first days, when it started happening in Mariupol, my russian blood boiled out with rage.

How do I feel about people who have been waiting for the “Russian spring”? I will tell you about one event from my life. That morning, when the full-scale envasion broke out, I had a conversation with my biological father. I asked him in a message about “brotherly nations”. He replied: “You, the Bandera people, should have behaved differently.” He lives in Mariupol. I don’t know what’s up with him now and I don’t want to know. I heard everything that I needed. Anyone who proves to me that Russia is good and there are people will not matter to me.

Back in 2015, when I was offered to go abroad, I decided not to go anywhere from here. I will not go now either, because I was raised like this. I am comforted by the thought that if one of the russians breaks into our house, they will see a lot of Ukrainian symbols there. And I hope he chokes on his own bile.

When Ukraine will win… I have many plans. I want to look positively at everything that is happening. It’s hard, but I’m trying. First, I want to hug all my loved ones. Secondly, I dream of opening a resort center in the already rebuilt Mariupol. I will try to improve the condition of my city. I believe that it will be rebuilt. I believe that what was done with Mariupol is revenge for the fact that the city did not surrender and in 2014 remained under the Ukrainian flag. Otherwise, I can’t explain why Mariupol suffered so much.

You know, I have a history degree. The events leading up to the war resonated with my knowledge. I do not teach now, but after the war, I will return to graduate school. Because I’m touched by the fact that now everyone regrets that our servicemen are dying. But many probably do not remember that they were dying all these 8 years.

Some say that we are finishing the work of Stepan Bandera, Yevhen Konovalets, Mykola Mikhnovsky, and other our heroes. Maybe now it will come to people that there should be honor to those who died before, and who are now protecting us at the cost of their own lives.

With the story of Veronica, we begin a series of stories of our volunteers – women and men, who as part of the Ukrainian Women Veteran Movement contribute daily to Ukraine’s victory over the russian occupiers.